Long, long ago, across the desert, mountains and valleys, lived the world of animals. In this world lived an elephant called Lewin. Lewin was feared and respected by all the animals in the forest because he was regarded as the strongest of all the animals. However, Lewin was very lazy. For that reason, he was nicknamed Lewin the Lazy Elephant by all the other animals.

He barely did any work. He wouldn’t go for communal labour and never made a farm of his own, but during the harvest time, he would go around harvesting from other animals’ farms, and they all could say nothing, not even the Lion, the king of the forest.
The days and seasons passed and there came a time when all the rivers in the forest dried up. As a result, the animals began to die in large numbers. The number of deaths grew worse each day.
One day, the king, Mr. Lion, called for a meeting. All the animals in the forest attended the meeting except Lewin. The meeting ended with the animals concluding to dig a well to save the situation. On the appointed day, all the animals availed themselves except Lewin the Lazy Elephant.
In few days time, the animals completed the digging of the well, but immediately after the well had been dug, Lewin the Lazy Elephant moved to settle near the well preventing all other animals from coming to drink from the well. All efforts at stopping him from his greedy action proved futile. For this reason, the King called for another meeting.
At the meeting, the lion king of all animals made it known that, whomever could stop Lewin from his greedy actions would be given half the kingdom to rule. Also, the king’s beautiful daughter will be given for a wife. All the animals longed for such a fortune, but who could stand against the strongest animal in the forest?
Mr. Crab, who could not attend the king’s meeting, was heading home from the farm when he realized something strange going on. Almost all of the animals were standing in groups chatting among themselves. He finally overhead one group of animals talking about what the king had said during the gathering.
He drew nearer and asked what had happened at the palace., but since he was regarded as the weakest animal in the animal kingdom, the other animals just laughed at him. ‘‘What can you do? Do you think you can defeat Lewin and get half the kingdom and also the king’s beautiful daughter?’’ said the monkey as they walked away.
As the crab walked slowly home, he thought about what the others had said. ‘‘If only I could get Lewin to surrender, I will surely be rewarded with the fortune.’’ That whole night, the crab did not sleep. He sat in a small corner of his room pondering how he could defeat Lewin the Lazy Elephant before the first cock crowed.
He finally thought of a brilliant plan as to how to make the lazy elephant surrender. He decided he would waited patiently for the night to pass before he would execute his plan.
At dawn the next day, the crab sneaked into the well without being noticed by Lewin the Lazy Elephant. It wasn’t long before the elephant came to take his early morning drink from the well, but before he began to drink to his satisfaction, the crab entered his trunk and began to nip him!
Lewin wailed and wailed, he cried and cried, pleaded and pleaded for the crab to stop, but the crab wouldn’t listen to his cries. Finally, as the elephant was becoming weaker and weaker, the crab spoke out, ‘‘I will only stop if you agree to do as I tell you.’’
‘‘Tell me what it is and I will do according to your wish,’’ responded the elephant.
By then, all the animals had gathered there wondering why Lewin was behaving so strangely and talking to himself. Finally, the animals heard the small voice of the crab. ‘‘Promise me and all the animals who might have gathered here, that from now on, you will stop being greedy and will become hardworking instead, and if ever you go against these words, you should be put to death.’’
‘‘Okay, I agree and promise to be hard-working and stop being greedy,’’ answered the elephant out of pain.

The biggest surprise came when the crab stepped out of the elephant’s trunk. The animals just couldn’t believe that the weakest creature in the entire forest had just caused Lewin, the strongest animal, to agree to turn over a new leaf.

As happy as they were, the animals cheered and lifted the crab shoulder high to the king’s palace. Hence, the crab was given the king’s beautiful daughter and half of the animal world to rule. From then, he was feared and respected by all the other animals and he lived happily thereafter.
Lewin the Elephant was no longer lazy, for the fear of being put to death. He became very hardworking and participated in all communal work. He helped to dig wells for the animal world; he made a farm for himself and helped other animals on their farms. All the animals liked him thereafter, but they were well aware that he was no longer the strongest in the land.

Thank you for Supporting! 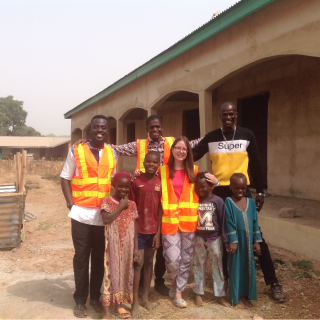 THE PRINCE AND PRINCESS ACADEMY PROJECT: We are the pioneers of the Prince and Princess Academy Building Project, united globally for the shared vision of providing an academic environment in Tamale, Ghana, that is affordable for lower-class constituents who otherwise are unable to send their children to schools due to excessive education fees. The intent of this project is to build a School to educate and develop the prospective leaders of this brilliant country. We have been able to complete constructing 5 classrooms and we are currently working on the structure to build some more classrooms. Contributions will go to funding the acquisition of resources and equipment for this process. Every contribution brings us closer to achieving an environment where a child is not denied his or her future due to high fees. Your contributions will allow us to give quality education, from a team of qualified and passionate teachers to these children so that they may one day give their own contributions to the country as a whole. We thank you from the bottom of our hearts for making this vision come true. Click the link below to learn more about the project; https://princeandprincessacadmy.com/about

Current View of the School